Kristianna Lingenfelter had been improving all summer but just had not quite hit her stride in an event. She  not only hit her stride at the IHSAA Sectional but played her best round ever firing an even par 71 at the difficult Stonehenge Golf Club in Warsaw, IN.

The even par 71 was the lowest round by a Zebra golfer since her older sister Kinley fired a blistering 67 to win a Sectional Championship at Stonehenge  in 2016. In both cases, Kristianna and Kinley beat everyone in the field by 11 shots! 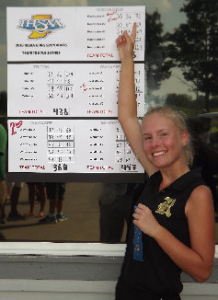 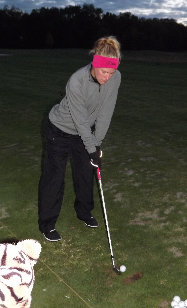 Kinley Lingenfelter advanced to the IHSAA State Finals for the 4th consecutive season (13-14-15-16).  She blizted the Sectional field at Stonehenge in Warsaw with an RHS and Sectional Record 5 Under par 67!  Then, she played a solid round of  2 over par 74 at the Kendallville Regional. at Cobblestone GC to qualify to play in the Finals at Prairie View GC in Carmel, IN.  The weather at the State Finals proved brutal for the 3rd year in a row.  Kinley was at the course the entire day Friday.  Play was interrupted by severe weather and when darkness fell, she had only completed 16 holes.  She was up and hitting balls before sunrise on Saturday in order to be ready to finish the first round.  Then, after a 2 hour wait, returned to the course to play the 2nd round.  Her scores of 83-84 =167 and finish of 41st were both disappointments.  Although it was a tough way to finish her high school career, she rebounded the following week in the Hoosier Junior Championship at Otter Creek in Cloumbus, IN firing rounds of 80-74=154 to finish in a tie for 2nd.

In the photo, Kinley warms up before the State Finals.

In the photo, Kinley talks over strategy with RHS Coach Chad Thomas during the first round on Friday. 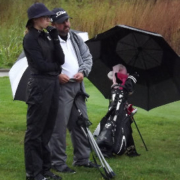 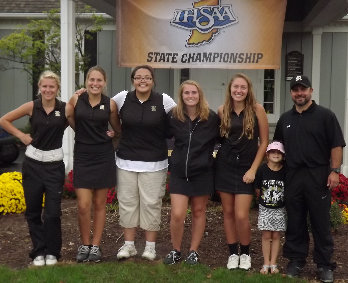 The 2013 Lady Zebras completed the regular season with a 20-2 match record.  Both losses were by the narrowest of margins.  One was a single stroke and the other match ended in a tie but was lost on the 5th player tiebreaker.   RHS finished 2nd at the Warsaw Sectional and 3rd at the Kendallville Regional on the strength of Kovenant Lingenfelter’s pair of 76’s.  Karsten Lingenfelter led RHS at the State Finals with a pair of 80’s.  She finished 33rd and RHS finished 14th. 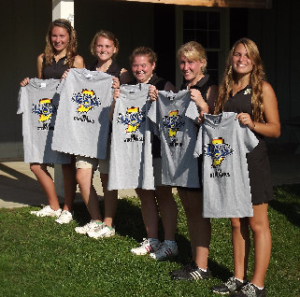 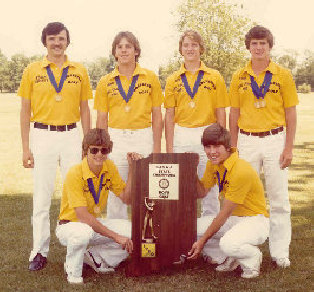 The 1980 Rochester High School Team dominated the competition at Old Oakland golf club. Rochester’s total of 611 bested the nearest team by 22 strokes and remains one of the lowest team totals at the Old Oakland layout. Todd Smith led the team and won the medalist honors with a 76-68-144. The second round 68 is the second best State Finals round at Old Oakland. The only round better was a 67 fired by Fuzzy Zoeller in the 1970 Finals when the course played approximately 300 yards shorter. Terry Smith finished at 75-78=153. Mike Shafer carded a pair of 78’s for a 156 total. John Sawyer shot rounds of 81-77 for a 158 score and brother Rob Sawyer had 84-87=171

Todd Smith, seen in the photo above wearing 2 medals, was the first Rochester High School golfer to win an individual title. His two round total of 76-68-144 earned the medalist honors at the Old Oakland Golf Club in the 1980 Finals.   Todd is now the PGA Professional at the Rock Hollow Golf Club in Peru, Indiana.

Chris Smith, Todd’s younger brother, became the second Rochester High School golfer to win an individual title. His two round total of 149 was also at Old Oakland in the 1985 Finals.   Chris is currently a member of the PGA Tour with a Buick Invitational win to his credit. 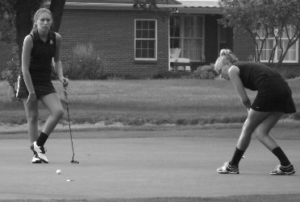 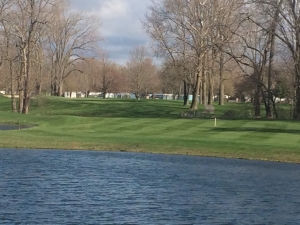 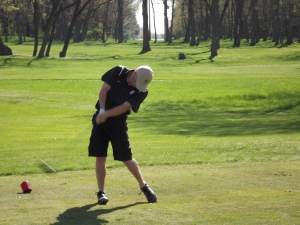 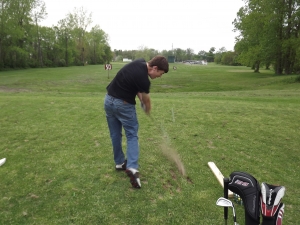 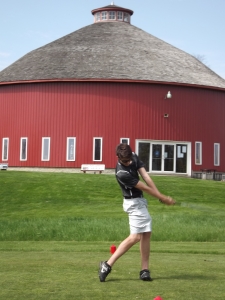